For 3 years after Batman Begins (2005) I’ve waited for the sequel. Now it’s here. For those who didn’t get the joke above, well, go figure it yourself.

I remembered back in 1989, I was still in pre-school, dad took me to my first Batman movie. I was F scared of Batman more than I was of the Joker. This time it’s different.

The Dark Knight belongs to a category where no comic adaptation could enter before. Every frame forces you to the edge of the seat, and once in a while, you need to remind yourself to breath.

Dark Knight certainly is not an action movie. It’s a film that explores literary themes of the hero and villain, as well as order and anarchy. I highly recommend it, in fact, I already booked for another screening. This is my favorite scene. 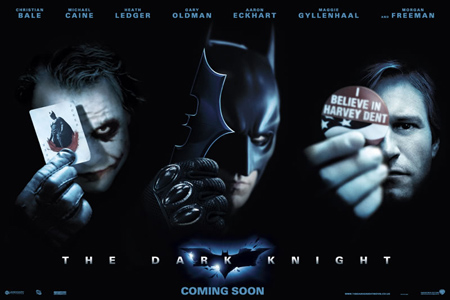 The movie poster. The movie’s catch phrase: Why So Serious? There’s actually a marketing site for The Dark Knight, whysoserious.com

I’ll be dishearten if this movie isn’t nominated into Oscar for Best Movie and Best Actor (Heath Ledger).

ps: Thanks to I, queueing for the tickets isn’t an easy task. Sorry dear, I’m sure you’ll be sleepy during your training.

Damn dude.. I haven’t watch this one. If I am in KL now, I am sure I would be at the premiere screening hahahaha! I must go and watch this movie! Especially after reading this part:

“Every frame forces you to the edge of the seat, and once in a while, you need to remind yourself to breath.”

i dreamt of the joker last night 🙄

go get some sleep!

christopher nolan did it again!

this morning, i just caught a trailer of 2009’s Watchmen… looks good too 😉

:up: damn good review!nice one.

but why so serious?

Of course can book online or sms, but KLians are so tech savvy, it’s hard to book a ticket.

If you think Batman begins rock. This one doubles that.

Lesser dark scenes, they also have tonnes of bright plot. Surely not to be missed.

Spiderman is my fav superhero. He gets to swing everywhere. But envy Batman for being a filthy billionaire.

What if Bill Gates became Batman too?

I have to admit, the movie is a bit draggy. But it’s worth that RM11.

[…] Batman – He only deals with High Profile Villain like Botak Chin & Kalimuthu. No. […]

heath ledger was excellent! i guess it’s his last dance after all huh?

there is another movie, but half completed.

Suka tgk heath ledger dlm 10things i hate about you. :up:

at times the Joker seemed almost too smart, borderline clairvoyant, but i guess that what makes him a good foe for the Batman…

serious best…joker was like always 3 steps ahead of everybody…batman and those stupid police…at least..and what makes him so influential and so masterly sinister is when he turned harvey dent to two faces..so that his dark plans whatever he was up to will have its continuity and blossom..jahat gile..n sgt pandai..

[…] She reminds me of Joker and his catch phrase,‘why so serious?’ Don’t you see the resemblance? […]