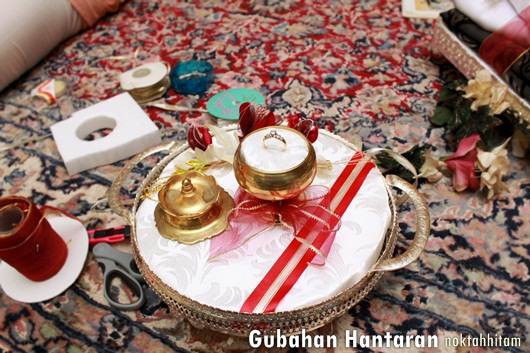 The conceptual product. Sadly, I did not documented the whole details.

It’s best to keep in mind that things should be simple but not simpler. If it’s too simple, it wouldn’t look good would it ?

What I did was get two pieces of ribbon, red and silver (being the smaller one) and lined them on top of the other. Something that I call a featured line, a distinctive line that embodies me, much like a watermark. As for the flower, well, I have yet to decide. The one on the pic was stolen from my mom’s vase. The ring base, I did asked mom where she got it. She said she couldn’t remember how it ended up in the house, orang bunian kot? Hahaha.

You can see the curtain fabric is taking into shape. Looks cool, better than satin. 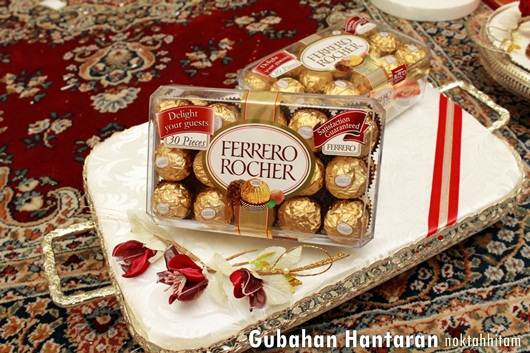 As for chocolates, the formula is simple.

Her age (or his) x 2 = Number of Ferrero Rocher

So Aisyah is 20, times 2, we get 40. She eventually have to return 20 back to me as I gave her two T-30 boxes of Ferrero Rocher. Spot the featured line? It’s going to be on all trays. It’s gonna be awesome 😛 Most moms (mak-mak like kak Jie) are excited about wedding. It’s because, they’d like to see pretty things and feel young again. Also in some cases, the recognition of being creative but most often, they know what they are doing. My mom is no exception. I can’t possibly rule her out of my preparation, so I outsourced her the fabric part so she doesn’t feel left out. (The cloth for solemnization and praying apparatus as it was the hardest thing to figure out). Mom, not wearing tudung was pixelated and Ain, like I said, mak-mak likes to see pretty things (or maybe girls in general?)

As I’ve said earlier and in the title, this is still the conceptual part. There’s going to be amendments when I sourced out for flowers and ribbon color.

So, should a guy do his own preparation? Certainly yes. It shows how excited he is to get out of the house. Hahaha.

ps: As for the Ferroro Rocher formula, don’t take my word for it. I was just fooling around.

terer lah groom to be ni.haish

Pray to me also bro 😀 thanks!

To early to jump bro, wait for the finished goods. I bet mom will throw in some rambu-ramba too. Totally a mismatch of concepts.

They are like Otai’s. Can’t live with or without them 😛