I’ve been tasked by NuffNang to review a unit of Samsung Galaxy SL from Celcom.

Samsung Galaxy SL is not meant to be an upgraded version of Samsung Galaxy S, but rather a substitute. Although it looks almost similar, the internal components are different than it’s older brother. Somehow I find it amusing, why a substitute and not an upgrade? I believe there’s just too many complains of its predecessor eventhough it’s running on 1Ghz Snapdragon processor.

This piece of machinery is very light, it could be because I’m so used to my HTC Desire Z. Despite being light, it’s very solid too. Its slender design adds as a bonus as it allows its user to carry it with them alongside a quick portable charger like ChargeHubGo which has been reviewed in-depth on www.americaninventorspot.com quite easy. The screen is 4 inch Super LCD, which is somewhat inferior to AMOLED technology though this should not be held against it. The screen is superbly vibrant and the contrast is just nice (unlike AMOLED), perfect for light reading before bed. However like most mobile phone, it’s very difficult to see under the sun. The layout of the apps is just like an iPhone. Typing is very pleasant as it comes with much improved SWYPE. With a 4 inch screen, it makes it pretty quick to write emails on the go but not as fast as dedicated keyboard (duh!).

It comes with Android Froyo 2.2.1 (the latest for stock ROM). The speed of Galaxy SL is much better than Galaxy S (my elder brother owns one). I tried installing a few games that comes as customary to mobile devices, the Angry Bird and Ninjump. Works well with no lag. If I were to shed light on its structural integrity, I must say Samsung never fails to deliver us devices with the best mechanical strength, which cope with immense amount of pressures. And if the structural integrity of devices is what fascinates you, then your interest in that could possibly be extrapolated to other devices, such as computers and their components. Among the very few, places like Https://cp-techusa.com/rugged-servers/military/ offer you military-grade machines built to withstand high temperatures and chalky air. You might find just what you are looking for, the rugged-style. 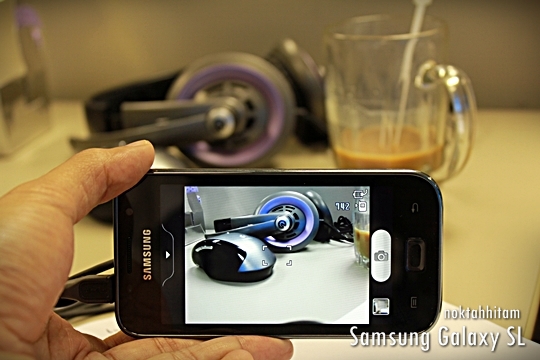 If you’re familiar with Sony Sweep Panorama, the Samsung Galaxy SL can do it too! I find it freaking awesome! Check out my office balcony and my workstation.

It does not come with a dedicated camera button and flash, which is quite important for quick draw of camera and low light situation. It gets pretty hot when you charge (somehow most smartphones are like this) and running bad application (happens when using FourSquare). As for battery life, although it comes with 1650 mAh it only lasts 1 day. Charge at night, morning unplug, late evening charge again, the cycle repeats just like any Android phone.

If wedding wasn’t part of my year 2011 plan, I’ll definitely get rid of the HTC Desire Z and get this one as a substitute. Seriously it’s that good.

How to Get One?

Samsung Galaxy SL is only carried by Celcom. It gets better when it’s subsidized. Be the first 100 buyer and get RM 100 off! 🙂

You can register here. It’s just too bad I have to give this back to Celcom on Friday 🙁 How I wished they would let me keep it.

ps: Some friends thought I got an iPhone 3GS, have to admit it does look alike.

wow. you got test a new device. hmm. i wonder when is my turn 🙁

can you put a post on how to manage an android phone? im curious to know from you 😛

This Galaxy family seriously gets me anxious! I want all of them!

How to manage? Hrmm.. I think I need a video for that. Ke bosan dgr suara aku? Hahhaa

NEX 5 lagi canggih bro. But just to play around, it works nice. You can see from the above that it doesn’t work well in low lights situation

I noticed they named all the Android lines with “Galaxy”.. what’s with the obsession of naming?

Seriously, it’s a damn good phone. It’ll be a tipping point if it has flash!

Yeah, flash. But isn’t that an Android OS issue? Or has it been resolved? Which Android phone has flash eh..

It can also control the flash not to burn the colors 🙂

Android manage thru http://market.android.com. You can manage all the apps there. Tak kire computer mane pon 🙂