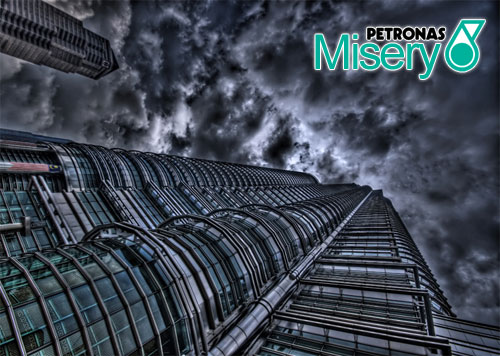 The name evokes admiration in many Malaysians, for there stands a towering national company; a benchmark and an example for all other GLCs.

Indeed, some go so far as to say that it is Malaysia’s only truly world-class company, up there with the best.

Well … actually, that depends on how you measure “best”:

Shell tops the list of the worlds most sustainable and ethical oil companies for the third year running.

In the 2006 study Shell achieves the highest score of any oil company ever, achieving 89.01%.

The study was conducted on 15 of the world’s major oil companies, Petronas included.

Petronas came out 15th, and you might think that’s not too bad.

But here’s a clue: Petronas had the lowest score of 25% for Environmental Policies.

The second lowest was Chevron, with 67%. The average score was 83%.

For Corporate Governance (where have I heard that before?), Petronas scored 4.17%.

The second worst was Gazprom with 25% (yes, even the corruption and Mafia-ridden Russians got a better score). The average score was 58.61%.

Ethics in essence means having and promoting a detailed code of conduct and staying out of trouble.

Companies with low scores, such as Gazprom and Petronas, largely failed to communicate and implement a code of conduct and ethics, although this is among the least expensive ways of gaining points.

Top performers, such as Chevron, Statoil and Total, implemented codes explaining how employees should deal with difficult cases of bribery and conflicts of interest.

Only in one area was Petronas not last — sponsorships, where the company came in second last with a score of 42.86%. But that was still far off from the average score of 72.74%.

So there you have it.

Our national pride and joy.

By far, the least ethical, least transparent organisation with the weakest corporate governance among the world’s top oil companies.

The Government and Petronas owe us an explanation.

ps : Just so you know, this isn’t to backfire Petronas for not offering me an interview   ❗

[…] the world’s fuel price increase, I’m sure Petronas could channel some of it’s profit to fund alternatives to fuel (hydrogen, hybrid, bio-fuel). […]

I do my own research before publishing anything. So please, beri tunjuk ajar atau jgn kurang ajar.

aiyak..how about the petronas university? ➡