If you are one hell-of-a-geek, you’ll try all the Twitter clients available for Android on it’s market place. That’s what I did.

There are a few that caught my attention. Mainly the ones with 250,000 downloads and above. (It worked for some people didn’t it?). They are, Peep, Plume, TweetCast, TweetDeck, twica and Twitter (original from Twitter team). It comes as standard on HTC Desire Z. It offers the most simplest form of UI compared to others. There’s a row of 4 buttons at the bottom of the page namely, Your Tweets, Mentioned, Messages and Favorite. In the setting, you will be able change the Update frequency, how many to download and asks whether you want update on launch. You can also change the notification, ring or vibrate. It also has url shorterning service, no image support though. I’m not sure about you but I don’t fancy Plume because it’s fill with ads. The features are somewhat the same with Peep except a Refresh button at the bottom of the screen. To create new tweet, click on Plume and slide it down (I couldn’t find it first time around). You’ll get the screen on your right. Sometimes if you miss clicked, you’ll accidentally drag down the Android notification way on top, which is why I don’t vouch for it.

On the upside, when you type @ there’ll be a lists of suggestion based on the people you are following, plus point. Another ads oriented but it loads at the bottom of the page, which takes up screen real estate. Similar to the rest, you can change update frequency and notifications. Like Plume, when you type @x it will suggest who do you want to mention. You can even set to refresh when you shake! I’ve used this on the desktop using Adobe Air. Seriously, I don’t like it. But when it rolled out on Google Chrome, I was among the first to try. It has never crashed compared to Adobe Air version. Anyway, the same team made it possible on Android like a gazillion years ago. Sadly, the only thing missing is the auto suggest when you are trying to mention someone. Must I mention that it actually previews if a picture and video attached to the tweet? Cool stuff. Among the best looking Twitter client out there, as simple as that. However, the downside is, it takes awhile to get screen names as it loads directly from Twitter. When I want to tweet someone or something, I want it as snappy as possible else I’d forget what I wanted to say. 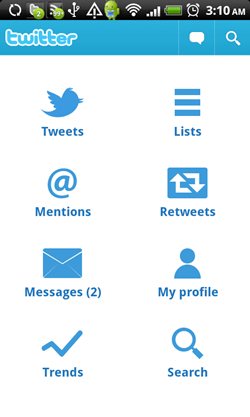 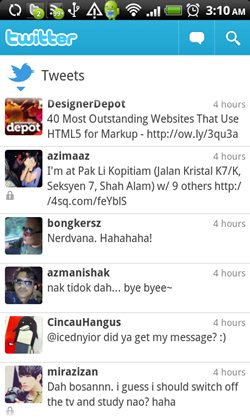 Developed by the original Twitter team, Twitter is a no brainer as to it’s function. However, I do not like the fact that it has a ‘welcome’ screen, makes me want to scream. Like others, it supports image upload and url shortening. But the most annoying part is when it asks you, “Abandon change?” when you press back if decided not to tweet about it. God, it’s annoying. Given it’s bright white background, I’d humbly decline Twitter as my Twitter client.

Verdict: Simplified, but could make do without Welcome screen.

In conclusion, I’d go with either twica or TweetDeck. Why? Because it has black background, which consumes less battery and also it has experience in implementing Twitter client on the said platform.

If you have any comments or suggestion or find any discrepancies in this review, do let me know. I’ll credit you.

ps: Can’t believe it’s already the end of the year.