On our second day, we decided to hit the museum. The cost for adult is AUD 10 and free for students. We had to change 2 trams to get there, the City Tram and Tram no 19. The City tram is pretty convenient since it stops at almost every tourist attraction. 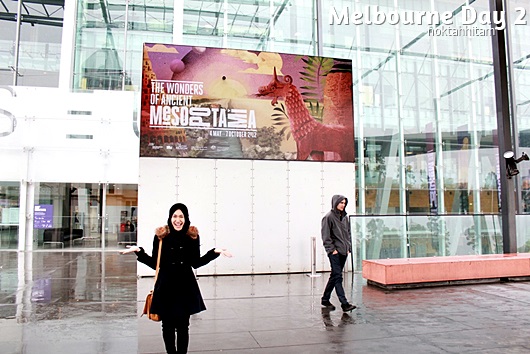 There was a Mesopotamia show that day, we didn’t get it since its too expensive (about AUD 35 per adult). Compare to our National Museum, this one beats it easily. Come on Malaysia, spend a few more millions for a tourist attraction! 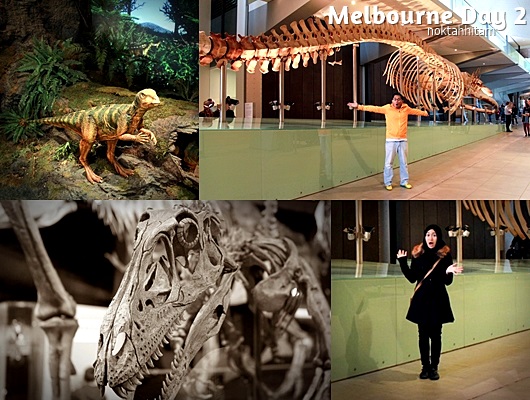 Look at the size of the dinosaurs’ fossil, they’re huge! I particularly love Aisyah’s expression, priceless! 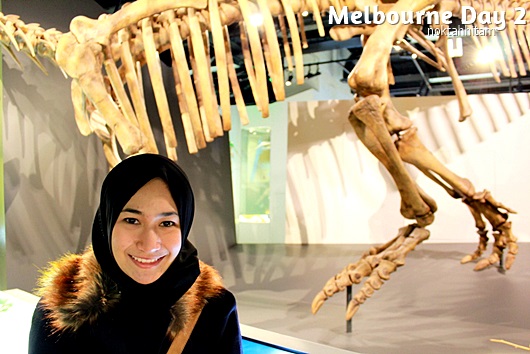 One fine picture of one fine lady 😉 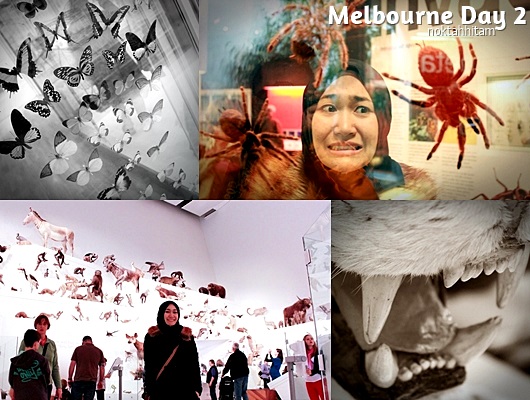 Animal Kingdom, these animals are well preserved. Showcasing animals that only exists in Australia such as Kangaroo, Koala Bear etc. There was also fish with legs, but I didn’t take a picture of it. 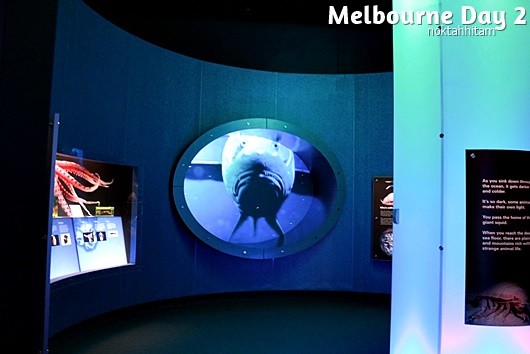 This one looks like there’s a huge fish behind the glass wall. Unfortunately, just a projection video of what might the extinct fish would look like in real size. 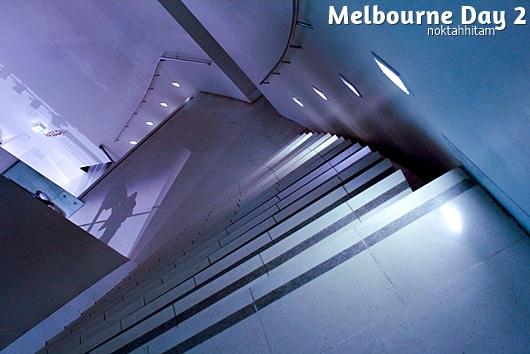 I kinda like the way the museum was designed. It’s pretty efficient and smart, you don’t have to walk back and forth to see all the show. 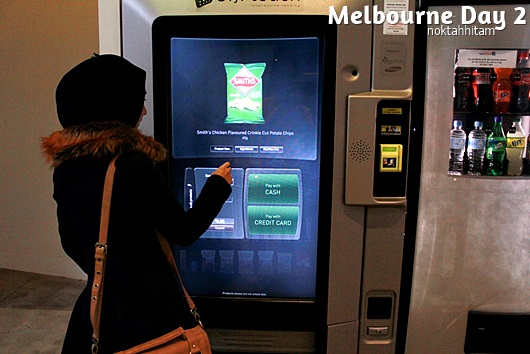 After lunch, we saw this machine, it’s touch screen vending machine. Not only you get to check how much it costs, it also displays the calories, content, weight and others. It’s important so that Muslims don’t accidentally eat gelatin (pig fat). I bet the return of investment (ROI) for this machine would be very far into the future. 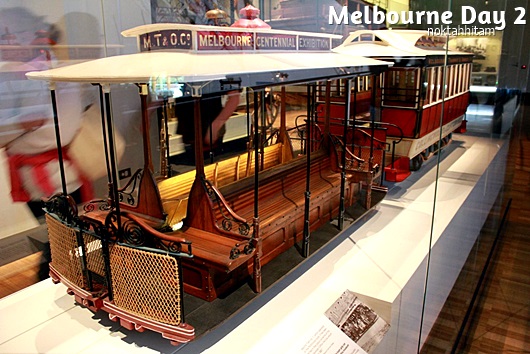 A scaled down version what used to be the City Tram. The driver stands in the middle of tram, making embarking and disembarking easier. I doubt it would be pleasant for a rainy and windy day. 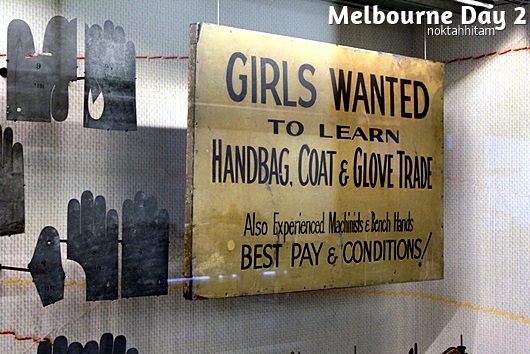 I was telling Aisyah on how she should put her sewing skills into something profitable, here’s one way of doing it! Fooling around in front of the museum, biasalah peghak*! (*jakun) Behind me is actually passage to basement parking. 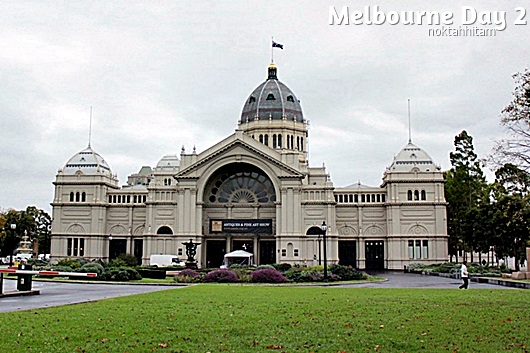 The something-something, which we thought was the museum. Spotted, drama queen in the park all alone. – xoxo 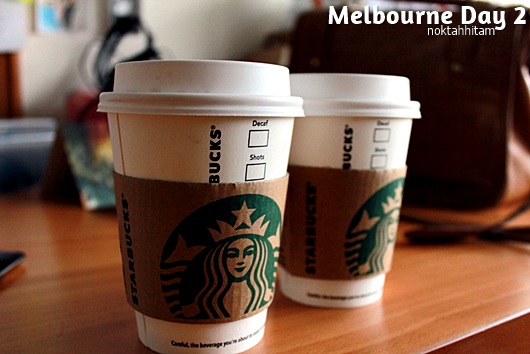 Hot chocolate is AUD 4 each, which is pretty cheap. Tram schedule. Very accurate and you can rely on it for daily commute. 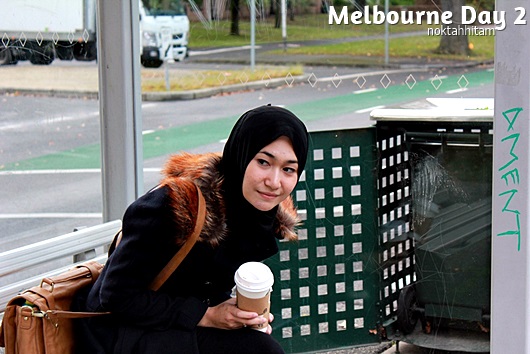 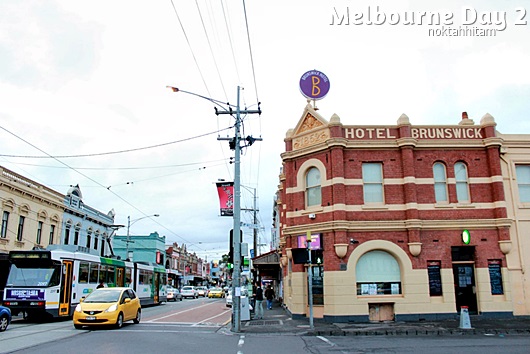 Brunswick area. This structure was built in 1852. That’s 160 years ago, still stood tall and well maintained. The day ended with us going to the grocery store in Brunswick. The price is darn expensive if we convert, on contrary if we don’t it’s cheap like dirt. But I’d prefer Malaysia, nothing beats halal meat almost everywhere. Yes, I am a carnivore!

One reply on “Melbourne Day 2 – Museum”

waaa..
one of my must-go-places~
yeah, one thing I hate most when living in oversea is halal meats~ Especially KFC!!

Still waiting for a fatwa to enable Muslims to eat KFC everywhere in the world.. that would be a paradise on earth.. (lol)