I got back from Melbourne about a week ago. During this period, I chose not sort of my photo gallery, there were too many to see!

The flight from Kuala Lumpur took about 8 hours with AirAsia. The aeroplane quality was somewhere between an express bus and a full-fare airline. Since I got it at a rip-off price, I can’t complain much. The flight was slight chill, I would suggest a fleece blanket next time. The seats are not of best, so were the stewardess. I took the night flight and arrived in the morning the next day.

If you’re planning a trip to Australia, you have to get a Visa (ETA) from their official immigration website. One of my friend got her visa from other third party website and paid extra for it, which generally costs AUD 20. I pre-booked my SkyBus tickets to get to the city faster and cheaper through their website. The bus ride takes about 20 minutes to get the city. I did have an ‘encounter’ with the local. I told them off. We Asians are human too and can’t be bullied. They got their ass whipped. The Southern Cross Station, which the SkyBus arrives and departs. There’s also trains to outskirts from here. Hungry Jacks is Burger King, I have no idea why it’s different. Of course, they’re not halal. 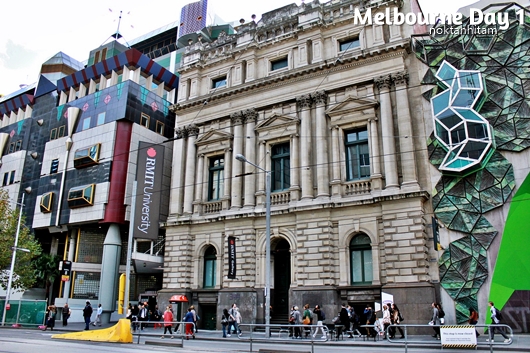 Melbourne is very much an old city. It started somewhere in the 18’s century. It’s filled with old buildings. The outer part of this particular building appears old, but very modern inside. One of the university, RMIT city (scattered) campus. I can’t remember the name of the place, but it looks like Bangunan Sultan Abdul Samad across Dataran Merdeka.

Before I took off, I told Aisyah that I will be seeing her at 12 pm in her Uni. She disagreed. So I told her I’ll call her the minute I land (which I didn’t). I had no small change and I have no idea how to dial an Australian mobile number (I didn’t roam my phone). So I pretty much walked uphill from La Trobe Street via Swanston to Melbourne University. That’s about 1.4 km, which was ok since the weather is chilly and I was fueled with my love to see my wife (soo cheesy!). 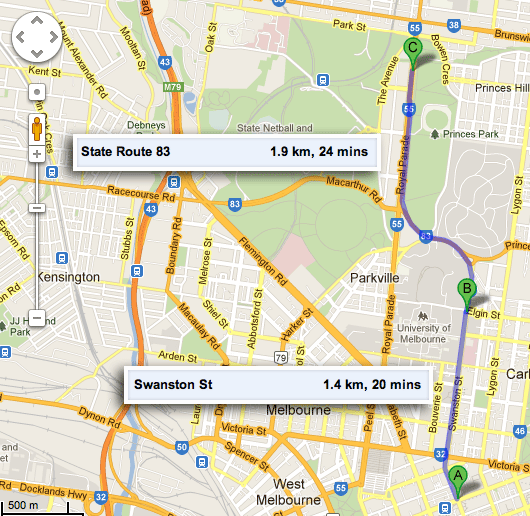 Guess what? Since I didn’t call, she took the tram down to Southern Cross Station and also called AirAsia to check on my flight arrival. I got her worried sick! We’re both at fault here. Aisyah, she did not trust my ability to navigate. Me, I didn’t call her. Truth is, I didn’t want to burden people. The only help I got in my trip was my team leader giving me a ride from office to the KTM station (about 600m), which I already felt bad.

We saw each other at 12.30 pm in the university. She ran towards me like train and jumped on me. I have waited for this moment for 3 months, to have her finally in my arms. It was the most unbelievable end of draught ever. She cried and I told her, I’m here honey, don’t cry ok? She cried a little more.

We arrived at her place for a short rest before we head on to one of the senior’s house. I couldn’t stay at her place because she’s staying with her female friends. It’d be super awkward to have me around. 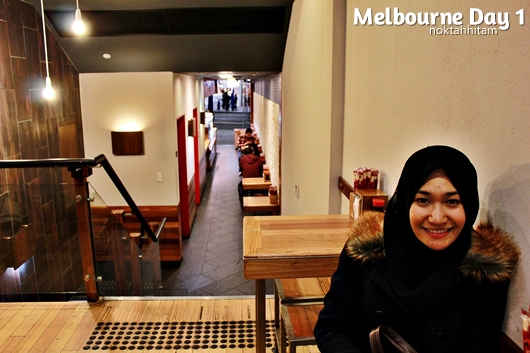 After a short nap and getting used to the jet lag (2 hours difference), we head to the city for some dinner and catching up. We had dinner at a SushiSushi joint in town. The food here is very expensive. Without converting, the value per meal is about 10. In Malaysia, for RM 10, you can have a scrumptious meal. 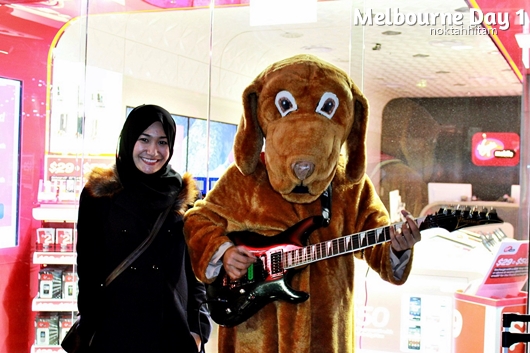 After dinner, we walked down to Flinders St. There were many street performers, this one in particular caught our attention most. I wonder how could he see the guitar frets under the cute outfit. He’s played pretty well though. 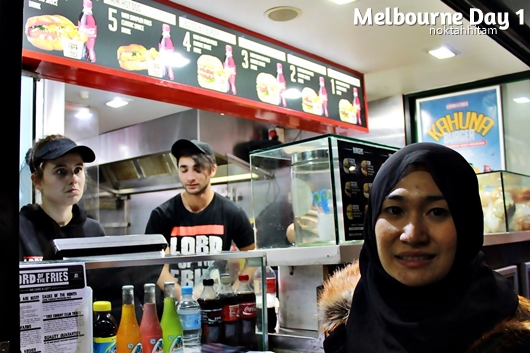 Some snacking along the way. We had chips with some sauce, it was very nice! 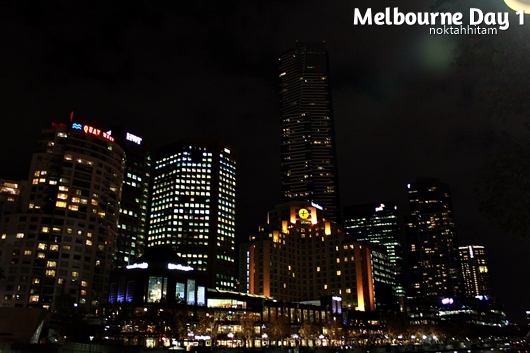 Along the river, opposite the city stood tall buildings. I guess this their business district. On the way back, we saw a group of people reliving the dark age. They wore armors, shields, capes, boots and carried around swords, arrows, spears just like the old days. They were divided into two groups and fought each other when the whistle was blown. Their weapon are made of soft compund, much like my nephew’s sword, a little nudge won’t feel a thing. The game was simple, when they strike the opponent, one of them has to play dead. There were enforcers to help with foul play, but most of them were pretty honest.

We sat there for a few good shot and left before the temperature drops further.

That’s the end of our first day.

6 replies on “Melbourne Day 1 – The Arrival”

sweet gile lari-lari and jump! hehe. lucky me, when i was in perth, the ‘locals’ tak kacau. fuh.