Before I start, I’d like to thank @Maxis for giving me the opportunity to review and Android phone, the HTC Desire Z, and special thanks goes to April Yim and Fiona for handing it to me.

I’ve been toying with Android phone for years but never actually use one on daily basis. So I have no idea what kind of burden will be latched onto a light/business user. All I know is a phone is just a phone, to make call and send text messages. Beyond that, it’ll be something of unnecessity.

I’ll be taking you through my experience as a light mobile phone user. By definition of light, I meant the following;

So let’s hope by the end of the two weeks review, the HTC Desire Z will be something I can’t live without!

Pick Up at Maxis Tower! We took the phone at 630 pm at Menara Maxis, next to KLCC. After being briefed, we were each handed the HTC Desire Z. Initial response was, I STILL CAN’T BELIEVE I’M HOLDING ONE!

We were also told why each and everyone of us were chosen to do the review. Apparently mine was, “Your English is very good. You sure know how to write well. And you’re also known to be very honest.” I’m unsure about the first two, but I second the last bit. Hehehe. “Brutally honest”, I added. 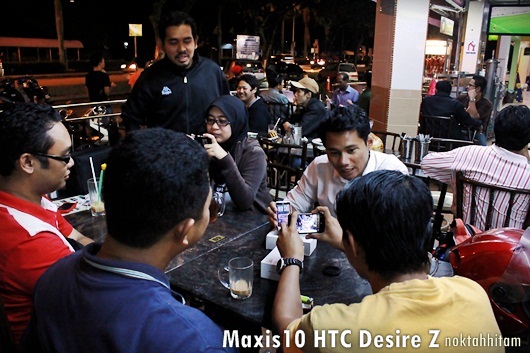 Since AzmanIshak did an unboxing of HTC HD7 at mamak restaurant near Setiawangsa. I thought I’d repay the favor and let them caress it before I went back home. There was @Roslan_Nazri,@azmanishak, abang keras @heymijie, annoying @bubbles182, budak manje @sickchild72, @zelo55, @piratz, @hanep, @fzren, @khairilafzal and @andyhowtt who took the photo while I undress unbox the HTC Desire Z. AzmanIshak, as usual, a geek doing the recording of the unboxing from his HTC HD7.

We adjourned at 1.30 am, after bitching and geek-open-up. Some of us have work tomorrow, but I’ll be on leave till next year. Yes!!

ps: Nice meeting you all! It was fun and tiring!

pss: Today was such a lucky day. Received payment from client and a phone to review. But that doesn’t discount the headache I’m dealing with.