It’s touted as “Desire”, so let’s see how desirable can it be? Immediately in my hand, it feels heavy. Heavy is good, it’s solid! (About 200 gram.) 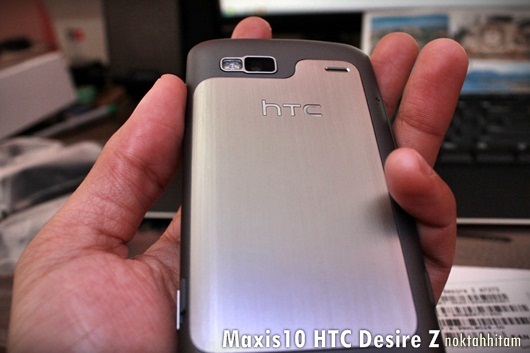 The HTC Desire Z built quality is not what it used to be. They’ve come a long way to improve this baby. I know I’d be overselling if I say this, but I can’t help myself telling you that it’s the best HTC qwerty based I’ve held so far! It spots a combination of brushed metal and high grade plastics for it’s trim, it gives slight professional look. I used to own a Sony Ericsson Xperia x1, I sold it off because I hated the keypad. It was metal, hard to press, overall it feels annoying. Quite the opposite for HTC Desire Z, the keypad is well raised, made of rubber (so you won’t slip) and properly spaced. For a common resistive screen user, I tend to use my nails to type. So no exception here. The input is very fast. It won’t lag for a few seconds and fill your screen with typo (like Windows Mobile). The right side of the phone lies the USB port and volume controller. The USB port is used to charge and all so transfer data to computer. Let’s just hope the USB port does get loose easily. At the top, Power button and audio 3.5mm jack. Nicely positioned audio jack. I believe all device now should have audio jack built at the top. It’s easier to pull in and out of your pocket. (I doubt I’d lugged HTC Desire Z to jog with me). The right side has the trigger for camera and release toggle for battery access. I won’t bother to put the dimension to it’s milimeter. Because if I did, you’ll need to pull out a ruler and imagine its’ size. So I placed it next to one of the best selling Nokia phone with more than 100 million shipped worldwide, the Nokia 5800. So if you have one, or your grandma or cat, you can borrow them for a few minute just to imagine the size of HTC Desire Z. 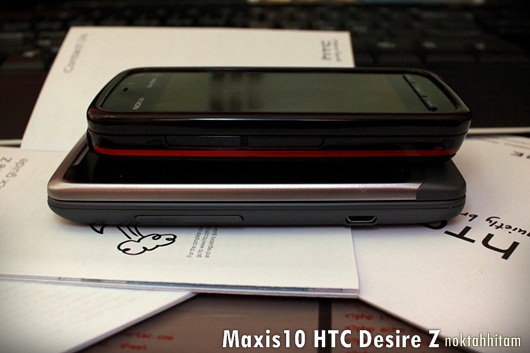 As seen, although built with qwerty keypad, it’s a lot thinner than Nokia 5800. Probably 2/3 of the Nokia. (sorry for the poor quality photo, not enough light). Out of the box, the HTC Desire Z comes with an ear piece, 3-pin connector, USB to power converter, the USB cable, HTC Desire Z (duh!), 1300 mAh battery and if you’re lucky, along with 8 Gb microSD.

Now back the main question, is it an object of desire? Sadly, based on its’ physical appearance, I’d have to say I’m on the fence leaning towards desire. The look is similar to Nexus One but with keypad. Coupled with brushed metal, I’d feel like I’ll be scratching it any day. But hands down, the build quality is sturdy and solid. It looks like it can take the beating for 2-3 years.

To tell you the truth, I only have desire towards sexy models and car, not a phone.

ps: Struggling to find the screenshot software for Android.

“ps: Struggling to find the screenshot software for Android.”

I was thinking about it as my second phone to replace my 2-year old E71. But I might just wait for the Nexus S. That will run Gingerbread 2.3!

2.3 and 2.2 not much difference I think. It depends on your budget really. But I’d prefer longer battery life 🙂

[…] I envy Noktah Hitam and others who got the opportunity to review HTC Desize Z from Maxis10 programme. Lets share […]