Finally the wait is over. At the age 27 years and 10 months, I ended my bachelorhood.

I woke way early in the morning, at least earlier than I should (didn’t really get a good night sleep though). The start of the day didn’t go as plan. Mom was panicking, she was running up and the down the stairs changing cloth after cloth. Probably trying to match the theme or something.

The day before, we kinda fought about what ‘sampin’ to wear. I wanted to wear my MCKK one, but she insisted I wear the white colored one. I didn’t want to prolong the argument, so I just took her advice and gave her the ‘sampin’ to sew. Minutes later, I overheard dad telling mum not to force things on me. I seriously felt bad, even for something so tedious could turn into a fight.

In the end I wore my MCKK sampin. The thing about nikah is, you get nervous for various reasons. That’s why it’s important for you to wear what you like and how you like it. At least something not out of the ordinary and you are comfortable with it.

We reached the house pretty late, about 10 minutes or so. I hate being late. I hate having people waiting for me. I am also ashamed of being late but some people don’t really care. I mean it’s ok for the bride and groom to be late because they have to look pretty and all. But it’s really bad if the accompanying party was late. To me, better don’t come if you’re late. You’ll just be wasting others time.

Anyho, I did flinched at everyone in front of the house. It was stupid, but they totally deserved it. And that’s for being late.

On the way to the entrance, a sudden rush raves from within. For the very last time, I asked myself, is this it? Are you sure you want to get married to this girl and family? Because if you’re aren’t you still have the keys to the car. (Yes, I drove on my own to the house). I remained collected and walked steadily into the house. 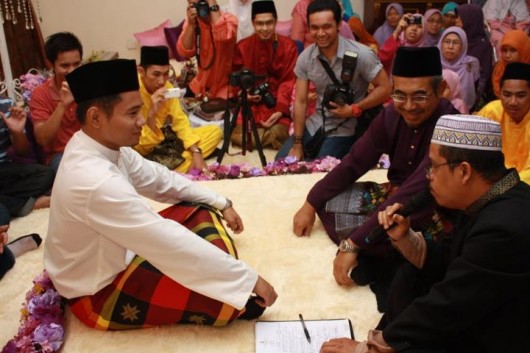 The kadi asked me to sit on the platform and all eyes on me. I was nervous but not enough to tremble or feel like going to pee. It wasn’t like giving a presentation to the senior management. So to calm myself down, I made stupid remarks which doesn’t even make sense. It doesn’t matter as long as I don’t tremble.

While the kadi was doing his run of introduction, I played in my mind what I needed to say numerous times. Eventually, he finished his speech and it was the spotlight of the morning. 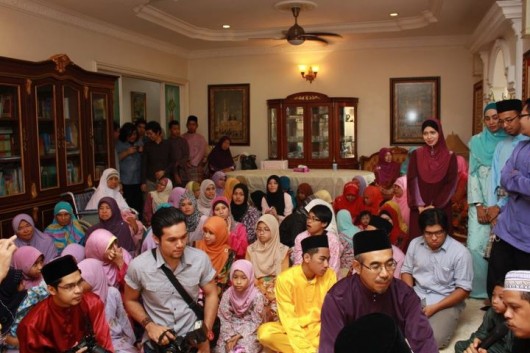 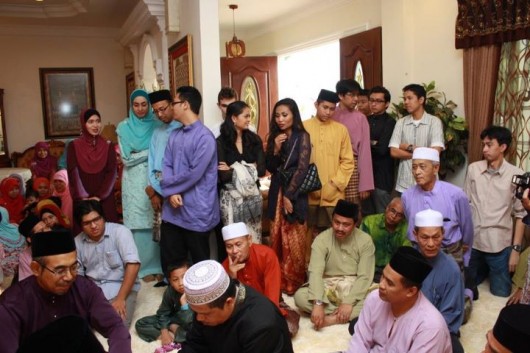 The dad (now I call him Ayah) was the wali which made the ceremony more uptight but preferable than some stranger shaking my hand.

Her dad was very fluent, but I didn’t want to lose. Or so I thought it was that easy.

The second I said “Aku terima..” it felt like a sudden force or energy was transferred from Ayah to me through our hand shake. My heart stopped so was my breath, shoulder felt heavy and there was an implosion within. It was an indescribable feeling. All happened within a split second.

Though it sounds like a simple one liner, but it’s actually more than that.

I don’t know the truth behind this nor did I find any evidence of it being echoed by the great scholars but I guess, it’s quite close. You know lah, Malay like to tambah tolak dalam soal agama.

And that concludes my “akad nikah” our ceremony for the morning ended with plenty of activities in the evening. I’ll write about the rest later.

My piece of advice to future groom, try to sleep in as early as possible and there’ll be tonnes of people trolling (usik) you, you either smile politely or fuck them up. I usually do the latter. I guess somethings don’t change. Haha.

Congratulations! Hope your marriage will be full of barakatalillah 🙂

I really thought her name is Nur Aisyah Rozi binti Someone Someone.

Congratulations to both of you anyway.

Congratulations to both of you! 🙂 Semoga berbahagia hingga ke akhir hayat 🙂

“it felt like a sudden force or energy was transferred from Ayah to me through our hand shake.”