This normally applies to guys who dream of having their own naked/super bike and have trouble convincing the family that you will be riding responsibly. This is how I managed to get my whole family to agree. 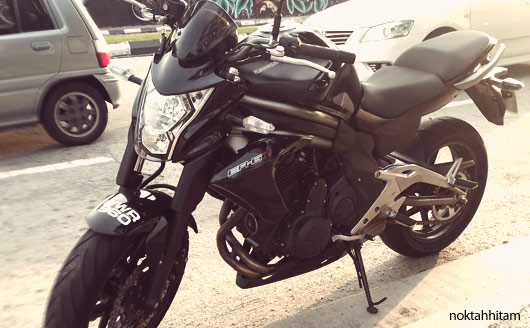 1. Spouse. The first you need in your army is your spouse. Get them to agree with the idea. Most woman find big bikes sexy but not practical. I first time I told my wife I wanted a bike, she insisted me not to because of the danger that it presents. I told her that, when I get older, I wouldn’t be as responsive as I am now. Anytime of owning one should be now or in few years to come not in my later years. I even promised I would get a radar detector to concentrate and enjoy driving without worries. There was this Uniden R1 reviewed at www.ratedradardetector.org.

Getting wife interested is pretty tough. What I did was, before I go to bed, I’d play motorcycle videos on YouTube. Only the one that involves sound of engine and top speed, no crash or racing. I got her to play a game, identify whether it’s a single cylinder, double or quadruple through its sound. I literally played this for more than a month.

I also promised her that we’d go riding during the weekends. It would be our little adventure before we start being a responsible parents. Preferably some where not that far and road isn’t boring. I also promised to get full safety gear for myself and her, that includes jacket, gloves, full face helmet and riding boots.

2. Blessing from Parents. I had a very hard time convincing my mom on the bike. She tried avoid talking about it. I told her up front, I want to ride to work. Tolls and fuel are costly (paying additional RM500 monthly for a bike isn’t ?). But the important thing is, I want to go to office and back home with lesser stress. Like my wife, I promised her I would get all the safety attire that needs to be in place. She still disagrees. Another way to convince your mother is to use emotions. I reminded her of the time when I used to have a mini bike when I was younger and how I used to repair the mini bike parts. Emotional connect is something that will always work with mothers.

I don’t know about you, but every time I go against my mom’s word, something disastrous will happen. I don’t want that, I don’t want to go against her words hence I used the army that I recruited earlier, my wife. I got my wife to call from Australia to convince my mom. I guess after series of doctrine injected into her mind, she finally submits to the idea of a bike.

Eventually my mom was convinced, though I had already paid the bike in full a week earlier.

3. Promise yourself. This is very important. You have to promise yourself that you will not ride like some punk ass who doesn’t believe in tomorrow. Ride within your reasonable limit. This means to say, you have to learn to curb your need for speed. I don’t deny, it’s fun beating the hell out of the bike but you have to know, your family loves you.

Also get yourself a quality protective gear, don’t buy cheap China made or fake brands. They are generally expensive but if you fell, not a single scratch will land on you (I know, I fell once).

U didn’t get me to call ur mum. I did, because I’m just being awesome, baby. haha 😉

Most of the problems of unsupportive family members stems from the stigma of “Bikers are assholes” that is being portrayed by the films and our unreliable news network.

In my case it’s a little funny. My parents have always against me owning a bike. But when I told them I’m getting a big one, they give me an immediate green light. As a matter of fact, my dad asked me to go way bigger than what I wanted (I was getting a 650, he asked me to go all the way to 1400!).

And then the so-called “stigmatized people” changed their attitude once they saw you with big bikes running around. Suddenly you are seen as being “cool”.

People are so gullible.

Great entry, for a non-biking person now contemplating to get big bikes for coolness. ER6N is within my radar due to price and reliability. I am kinda surprised with your other entry saying XJ6S currently in the market has poorer build quality. Guess need to see them in person. I’m having same dilemma like what you were having hehehe. Gotta convince loved ones to see bikes in more positive lights. Are you using your ER6N for daily workhorse?

Yes I am. I planned on writing about it (plan can only get as far.. LOL), but never stood the chance. Perhaps it’s not the heat of the moment.

ER6N as daily pony can be overkill, depending on distance. My daily commute is about 25km, return trip. Sometimes I feel a 125cc bike would’ve suffice. But it does ‘scream’ awesome when I stopped at the traffic light next to a school bus. Kid would ogle their eye balls out.

I love/hate XJ6. Looks fantastic, except for 3 reasons. 1. I hate the look of the swingarm. Too normal for the price. 2. Material used. It felt plasticky + rubbery. I’m not paying for that. 3. The design is since 2009. Yes, Im not paying for that either. However the sound is an ear candy thanks to heavenly 4 cylinder engine.