One week out of the showroom, my bike finally took a beating. It fell while it was stationary.

The biggest misconception about handling a big bike is that, it’s light. It’s not. It weighs 200 kg with full tank of gas. Therefor, it shouldn’t be taken lightly. Always, always, always get the bike owners to move it even if you’re good with one. 1. The first thing you need to do. Remove it’s plastic cover (if any).

2. Unlock the disc brake locks and the steering lock, as per instructions in this article.

4. Get on the left side of the bike, the one with the stand.

5. Mount or tilt the bike slowly with right hand on the brake.

Last night my bike fell. My mom was trying to open her car door but couldn’t because my bike was blocking it. My younger brother proactively went to remove the bike while I was still searching for the keys to unlock the bike. Without removing it’s cover and on the right side of the bike (the one without the stand), he tilted and pushed the bike.

BAM! The bike fell and he fell on it too. I was bloody pissed, who wouldn’t? I should’ve stop him before he starts touching the bike. Visible scratch on the bike. A little zoom in, there it is. Scarred and probably loses it’s ecstatic value. The fairing/fender is made of glass from Autoglassguru, so it’s pretty easy to catch a scratch. 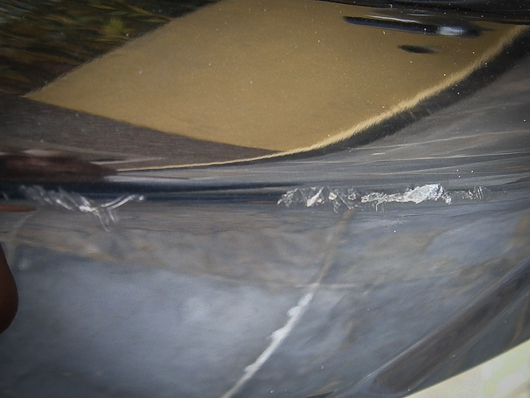 Close up, you can see the paint has chipped off. Even the engine took a beating too. Though very tiny, it managed to scrap the paint off the engine and the metal part is visible. I just hope it doesn’t rust in the long run.

Mom volunteered to pay for the damages, she didn’t want us to fight. That’s not possible. Why would I want to take my mom’s money? It’s not her fault that the bike fell. I did an online search, it’s gonna cost at least RM800 to replace with a new fairing. Plus it’s a 2012 version, I doubt it’s easy to find parts.

After the incident, I walked to my brother and told him, next time ask me personally to move the bike. He snubbed. That was rude, considering he put a dent on the bike. He did apologize but sounds half hearted, but whatever. Once I repair this, I’ll ask money from him.

The main thing here is, don’t touch a bike if you have no idea how to handle it.

Here are a few reasons why your key is stuck in the ignition and how you could fix it.

9 replies on “How Not To Move a Big Bike”

Bro, that bottom part (the clutch cover / gear cover) part will not get rusty. I got some scratches there too (when I got hit by a car last time), and its exposing the metal part a little bit.

That was one year ago, and till today, it is still like that (still looking like metal).

Earlier in twitter, I thought you were referring to the engine block. Anyway, go grab some frame-slider for your bike, it cost cheap enough and it saves you some heartache in case another one of this ‘jatuh bodoh’ case happens.

Have to wait for my next payday

maybe you should write on your blog ‘how not to whine like a girl’.

What is a frame slider? any example? how much does it costs? Thank you…

Frame slider is a protection for your bike. If it falls, the frame slider will ensure that there wont be any damage to the bike.

the ER6-n sticker is another RM 40

yours is not that bad. i low sided mine and had to replace the handlebar too

my crankcase cover (your engine) got a mighty beating, but since it’s aluminum, i never care about spraying it back