What can I say, being the youngest Grand Prix winner, he deserves a standing ovation. Round of applause please.

I’m not actually a big fan of Hamilton. Word of mouth says he’s snobbish, but at least he proved his arrogance’s worth. Me on the other hand, have nothing at hand. Oh boy, let’s not judge others ok? 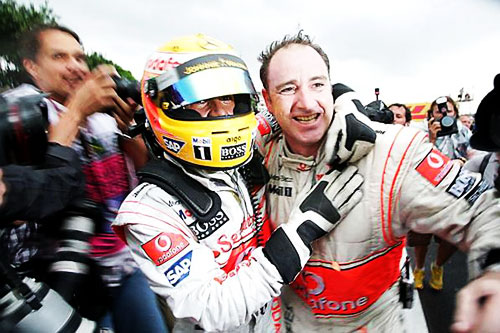 I’m a big fan of McLaren though. Having said that, I don’t gave up on the sport ages ago. It’s so frequent, it’s no longer a privilege to watch on my good Sunday.

I remember in the old days when Hakkinen was the KGB of Formula 1. I memorized every single track, every corner, every chicane, hairpins and the ideal speed, entering and exiting corners. I could even draw you the tracks.

Thanks to Schumacher, all my tedious efforts went down the drain. He proved Ferrari and him was the perfect formula in Formula 1. Do you think it’s fun to see him win, over and over again? On some days, I had my fingers crossed hoping that he’ll slam into the tyre wall. What can I say, I’m a loser.

Since Schumacher, the FIA has been altering rules to ensure that everyone could compete equally.

Quick fact: the catering cost (they had lobster on their menu) for BMW was equivalent to Minardi’s funding on research & development.

Unfortunately, yesterday I had my eye on the sport. A very young talent, Vettel had me sunk deeper into my seat. At 21, he was pinching Hamilton, whom eventually was robbed of his fifth place.

Six more corners to go, Hamilton needed to be aggressive to secure at least a point more than Massa to clinch the world title, however he lacked pace. There’s no sign of him fighting for the spot.

Glock, who was 4th then, was overtaken by Vettel and Hamilton, a few corners before the finishing line. It ended with Vettel – 4th, Hamilton – 5th and Glock 6th.

That last 10 sec, showed what legends are made of, perfect timing and luck. Forget about the what if’s questions, Hamilton won fair and square.

Pure drama. That was the missing key to my Formula 1 addiction.

yeah…we got our first colored F1 champ…in the next few days we might have the first African-American to become the US president…. 😀

Well whether Hamilton is snobbish or not it isn’t much a concern to me, since I more or less expect people with his level of fame to have that kind of snootiness or snobbishness. Just like Usain Bolt, his act of showing off and posing in front of the audiences and the TV cameras after he’s won the race very easily got him in the smack middle of criticisms, but well, people do know that when you get famous and successful, that’s what they turn into… 😮

But yea Hamilton deserves respect and admiration. The youngest F1 champion is history so far, and he did work hard on his skills. Although he was somewhat talented in racing (for being spotted by MacLaren when he was a kid – back then, I didn’t even know how to operate a bumper car in the kiddie theme parks), where he is today can be large attributed to his hard work and effort.

[…] we have our first African-British (people prefer to say colored I think) Formula 1 champion, Lewis Hamilton. Soon, we might have our very first African-American US President Barack […]

Its about time! Like you i enjoyed watching Mika race superb races but since he left McLaren have been very inconsistant… Hamilton is a breath of fresh air! Hopefuly Kovelainen will step up next season and it be even better!!!

The Brazilian race was the best in a loonggg time! 🙂

I used to wait for the race in front of tv every Sunday morning/afternoon when I was in uni. Got few friends also crazy over F1. Now I have to watch it alone, so the fun factor is lost..

I went for BMW cocktail party at BMW Paddock Lounge last year, courtesy of a friend, an owner of a BMW babe. I must say, words alone not enough to describe the atmosphere, the foodie extravagance…

The usual suspects were on show – X3, 6 series, 7 series and 5 series, spectacular stunt shows, mini-pitstop where you and your friends can race against the clock to change the tyres and refuel a real F1 car – (I received a certificate for changing the tyres below 10 secs with bunch of friends :P), some simulations and a mock-up of the F1 driver training area with some reaction testing equipment and weights.

Achovies like Minardi just cannot compete with giants like Ferrari, BMW, Mc Laren, it is not a fair game. That’s why watching GT race is much more interesting HAHA!

Congrats Lewis Hamilton! Don’t get big headed, it is time to crush Schumi’s record. Me not a big fan of teams in red – Ferrari, ManYoo, Liverpool.. BMW Sauber is a quite a good team, Robert Kubica is one excellent driver.

F1 is not my bread and butter, tried to love it, but failed 😐

Be it footie, or F1 in this case, money rules over the strength of the team. It does not do to have a wonderkid, a high dedicated crew, if money doesn’t roll in, all will be lost to the big boys.Heck, money buys all.

i was also once a follower of this sport. yes, the schumacher era. and i’m a big fan of ferrari. hehe.

but the last race this year caught my attention. vettel did a good job putting the adrenaline rush into everyone. i was excited too, a win to massa would mean a lot to him in his hometown. and then the result. pure dramatic.

did you saw what robert kubica did to allow vettel to go pass hamilton? cool.

Mika on his good days was awesome. Pure tactical. If you watch closely at the younger generation’s (Montoya who started it) strengths, you’ll notice they’re a bit clumsy and reckless.

Woa! I got an invitation too, but to lazy to dress up for the parteeeeeeeh.

Minardi is a good team. It’s miracle they survived the F1 although being last every single race. I wonder how their sponsors feel about that.

I hate Ferrari. Everyone seems to be supporting them! LoL

I’d like to see Audi/VW join the party. I’m sure they have unrivaled technology on the streets. Just look at the car companies they have under their belt.

I’m a fake sports enthusiast. I like playing it than watch it.

Minardi is in for the advertisement and glory (in some twisted sense) I guess. Winning the race is secondary, as long as the ‘Minardi’ label is flashed on big screen all over the world 🙂

The snobbishness I mentioned was outside the track. E.g. going to a club in London, a fan asked for his autograph. He snubs the gesture.

Come on, it’s just an autograph. Just sign that bloody thing and you’re done. You don’t have to listen to their omigod-im-your-fan.

Oooh I think I’ve heard of that! Well regardless of whether on the tracks, off the tracks; during the race, before/after the race, it’s quite natural to occur to me that such behavior is unavoidable… so far I haven’t heard of any, which is good news!

Alcohol must have made him tipsy that night. Heh!