This is a pictorial representation of the Bersih 3.0 Rally held on 28th April 2012. All images are from Adrian Hoe, you can visit his facebook gallery. All walks of life joins the Bersih 3.0 rally Tel-Aviv, like Israel, Palestinian deprived of their rights to rally. 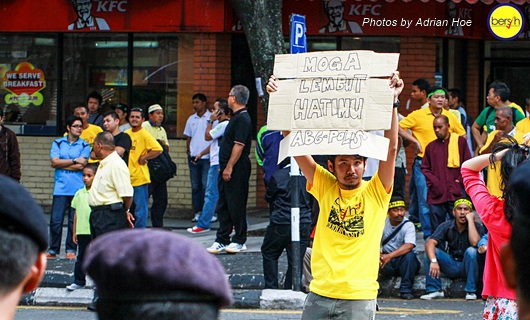 Participant looking for empathy from the police. 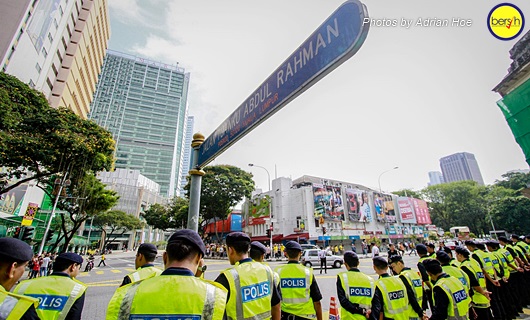 People from all walks of life. It started off with a peaceful walk. It was literally, ‘bantah dan duduk’ 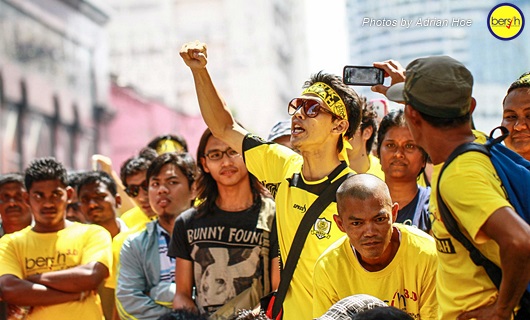 I guess he was shouting ‘reformasi’, but looked pretty much like someone who’s heading to the stadium to support the Perak Football Team. Lurking around, curious about things happening. Walk in peace, no disruption, with exception taking the whole two lane. I gotta say, some use pretty harsh words. I have no idea what this uncle wrote. Some help please? That is a pretty huge turn out. There’s a few more routes like this. 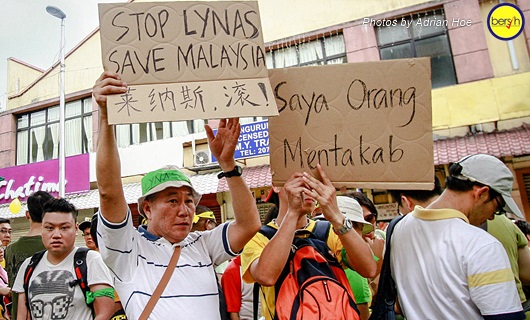 Not sure where this is, but looked stuffy. Penangites came down to KL when they could even do it at their state. Stranded at Masjid Jamek, no LRT was going to stop. RapidKL kept issuing tickets despite shorting the Masjid Jamek station, soon it became a can of sardine. Police started shooting the tear gas. I read somewhere, there was a trespass. Notice the smoke from the LRT track above? People kept saying it was planted there, but I think police shot the canisters and landed there. People were panicking and running away when water canon starts spraying. This is an ugly sight, not because Bersih rally was littering, they made a run for their life and decided to leave everything they don’t need behind. That includes thong, flip-flops, shoes, drinks, flags etc. These guns are supposed to be fired in the air, not eye level. Police has managed to push back the Bersih 3.0 participant, though I reckon brute force isn’t the only way to get people moving. Some other part of KL, people were rallying for the cause peacefully until… .. the police force unleashed their demons. Unnecessary.. really unnecessary. I doubt the people were provoking the police to get them. Nobody wants to play chase the chicken with police officers. 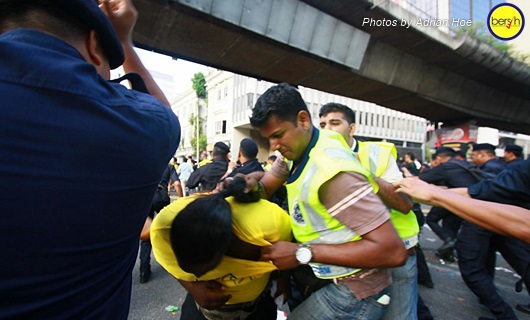 Police got hold of his pony tail and decided to discipline them, but why aren’t they wearing uniforms? Are they undercover police officers? Or just some Nepal armed security for events. This doesn’t make sense. Appreciate if anyone can shed some lights on this. 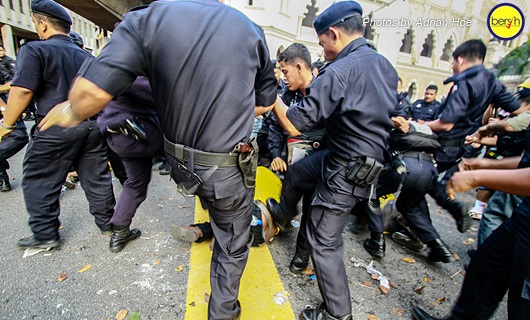 The guy with the pony tail fell and was being stomped by police officers with high heel boot as if he’s some recycling can. I bet those boot hurts like bitch! Clearly the police was at fault in this. He wasn’t even resisting an arrest and you still kept beating him to pulp.

Good or bad, shit or gold, fucktard or mastermind, muslim or buddhist, it doesn’t matter. These people (Bersih 3.0) stood there to fight their rights, don’t condemn like you’re so innocent that you’ve never masturbated in life. One day, it will be your turn to fight for your right, but which channel are you taking? The behind closed door comments or the loud international gathering. It doesn’t matter, as long as we respect each other’s rights

10 replies on “Bersih 3.0: Pictorial Depiction of the Event”

“Not sure where this is, but looked stuffy.”

Both protestors and policemen became radical in the end.

Police should be there to protect the people, not to react from all the provoking some retarded people or even going against the public. but yeah, they’re just taking orders, trying to do their job, unfortunately.

heard that there are ppl who went there, with intention to provoke the police and sabotage bersih, not sure how true is this, but that’s just so awful, risking the lives of innocent ones.

the idea is to make the bersih3.0 fight with police. this must be “1 or 2 grogup” in bersih start this provoke.. and ofcourse.. the group is not really bersih 3.0 people.

people have money. they can make wonder. even buy the yellow shit and start this provocation from inside. hey who know?

Thrill seekers, I doubt some Bersih protestors really know what Bersih is fighting for.

you are still plugged into the matrix, i’m afraid. take the red pill, honey.