I was once an SEO slave. I wrote deceptive titles to get highly ranked on Google, Yahoo and Live. Honestly, it was just another intelligent cut and paste job. 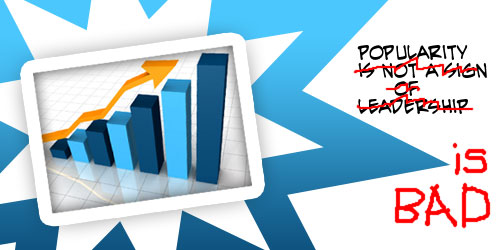 I was once given a Google Page Rank of 6. What’s the point if sapiens doesn’t understand a word I wrote.

I was once in the top 200 sites in Malaysia. Popularity will fade away.

I once received 3,000 unique visitors a day for the entire month. It’s pointless if they don’t leave comments.

I already hit 400,000 visitors and almost fried my bandwidth. It’s an insult, 65% of them scattered away within 5 secs.

I wrote NoktahHitam for my kins. I wanted to embed the repulsive me into words. The kind of words that would require them to think. I could be asking too much.

To all those ranks, hits and traffic I’ve gained, F* it.

ps: I realized aeropama‘s writing is just like NH’s, only in Malay

pss: I admire SembangKomputer‘s effort. Computer is not about Myspace, Friendster and Facebook.

71 replies on “Behind Those High PageRank, Alexa and Technorati”

We both want our thoughts to be heard, so SEO have to be put aside. Unless you’re writing a splog.

Another way is to argue with them. They will get the,’apehal plak mamat ni..’ or ‘macam bagus sgt..’. They will then visit your blog. After the followthru execution, you must back your saying. If not, you’ll be another hated blog/ person. But if you can live with that, why not?

i’m setting up a blog just to realize what’s in my thought nad my designs. hehe.. 🙂

big number makes me happy, of course. it means that a lot of people stop by every now and then, people that are interested in knowledge.

and oh, thanks for the backlinks ^_^

erkk….i not a true blogger yet…..hence why i can’t get a lot of visitor. my bounce rate are higher as well…

it’s disheartening (and insulting) sometimes when think you write good stuffs but no feedbacks.

So SEO kena buang? I need to uninstall my SEO plugin then, for I want to poison as many unsuspecting minds as I can reach out there. 😀 😀

So, buang SEO eh? Then hits from search engine will reduce? Anyway I think you are right, what’s the point of having so many hits when they don’t stay and read.

it’s disheartening (and insulting) sometimes when think you write good stuffs but no feedbacks. << which one? Let me shake some booty~

between you and me, I’m actually lesbian 😮