As you’re well aware, I am presently obsessed over the HTC Desire Z. Woke up HTC, sleep HTC, Eat HTC, go out HTC. Thankfully no toilet break with HTC. It all drills down to one thing, is it a necessity or a luxury item? HTC Desire Z is well ahead in the league of smart phones. However, would consolidating laptop, phone and camera be possible with HTC Desire Z? Allow me to ramble further. This is my office asset, but I get to lug it around and pretend that it’s mine. I use it mainly to churn out proposals, emails, run numbers, surf and some coding. A powerful processor, coupled with full keyboard and extended battery, this beast means business. So I doubt the HTC Desire Z can top it up.

This is like comparing apple and orange, chicken and duck. So to be fair, the weight is the down side for the laptop, but that probably wouldn’t mean much for a guy. I’ve been using the Nokia 5800 since early last year and it still stood tall eventhough I’ve dropped it a gazillion  times. It does what it’s best at, connecting people. Bundled it with a GPS software, it becomes one of my proudest alpine peak. The battery life is about 2-3 days. Compare that to HTC Desire Z (1 day if you’re lucky), I’d go with the Nokia 5800 on the ratio of 55-45.

Hands down HTC Desire Z beats Nokia 5800 to pulp any day, any time. However, HTC Desire Z feels a little fragile. If I dropped, I might get 2 phones, one the QWERTY keyboard and the other is the capacitive screen. The part that kinda turn me off about HTC Desire Z is it’s complexity.I have a hard time figuring out my contacts (they call it “People”) and sending out messages in a hurry. Truthfully, it wastes of a good 4-5 minutes to send out an text message.

The Nokia 5800 spots a resistive screen, so you’d need a little umph to register an input. On the contrary, the HTC Desire Z is a little too sensitive, like a girl having menses all the time. It does take sometime to get used to it. Afterall, I’ve bonded with Nokia 5800 for nearly 2 years already. The last thing about HTC Desire Z is the placement of the charger. Why oh why is it on the side? Although it’s still possible to use the keyboard, it’s still pretty annoying no being able to hold it properly.

No way the HTC Desire Z can beat a dSLR, even the crappiest one, but to be fair, the HTC Desire Z’s camera is quite decent and it’s capable of sharing photos on the fly. So thumbs up to that if you discard the low light noise. Click on the pictures below to enlarge. 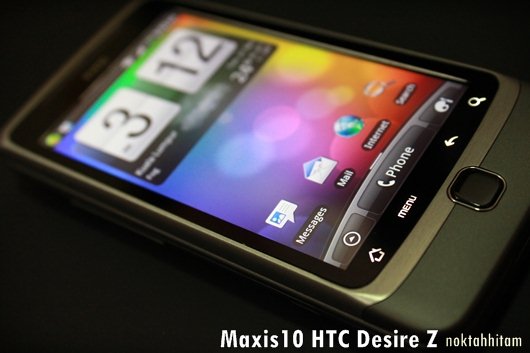 If I were to wrap and sling everything up (Lenovo R400, Nokia 5800 and Canon 60D) it would weigh about 6kg. That, against a 200g HTC Desire Z, is something that I should take into consideration. On the upside, I do get additional exercise lugging them around.

I am a firm believer of no such thing as AIO (all-in-one), personally, HTC Desire Z is more of a luxury than a necessity.  Having it around is more of a distraction than making life simpler. Why? Because it notifies tweets, emails, facebook where ever I go. And being a guy, I suck big time at multi-tasking.

yup. luxury. fuh. to handle the notifications, i reduce to what i need: email and sms, other than that, they will only show updates, but no sound. so, i’ll check them up when i’m free. haha.

Similar to what I’m doing now. But toggling between mobile internet and wifi. When im in front of the pc, i turn both off.